We are Top Leonberger Breeders in Hungary in 2019!

by the Hungarian Leonberger Club. We had a great time and got a lot of nice compliments.

We have been among the top three leonberger breeders for a few years, which means we are moving in the right direction, and this year we won first place for the first time which means we are the Top Leonberger Breeder in Hungary in 2019. Breeders can apply for this competition with the best show results of maximum 10 leonbergers who were born in their kennel. For us all results are equally important that is why we would like to thank to all our puppy owners who participated at one (or even more :)) dog show, and thus they helped us to reach this wonderful achievement:

The participants of the Club Winner from Lions from Fairy Tale Family:

We achieved many nice results even at the Top Leonberger of The Year competition:

Congratulations to everyone with lots of love!

Our last year was very busy, this is the reason why we did not share any news for a several months in our website. Our dogs achieved very nice results in 2019, we summarize the most important results and events below:

Our lovely veteran, Dotti, celebrated her 9th birthday in May 2019, she is in perfect health condition, she is energic and still she is the "favourite" of our postman. :) In 2018 Dotti won Veteran Club Winner title on the 40th club show of the Austrian Leonberger Club (where 130 leonbergers were presented), and I had the feeling that she was on the top of her show career and she could not surpass it, but in 2019 she did. On 1st of May we travelled to Leonberg, where we participated on the specialty show of the German Leonberger Club, and Dotti won second place and got Res. CAC title from judge Bernard Métraux (CH) among 8 wonderful leonberger ladies in a very strong veteran class. On 18th of May we travelled to Anthering, to the club show of the Austrian Leonberger Club, where Dotti repeated her last year's success and after 2018 she won Veteran Club Winner title even in 2019 at judge Evelyne Pambou-Makaya (F)! We headed to Tulln on 14th June because last year Austria organized the European Dog Show where leonbergers were judged by the former president of the German Leonberger Club, Willi Güllix (D). Dotti won veteran class in Tulln and she won Veteran European Winner title, and after that she was compared to the male Veteran European Winner and Dotti was chosen as the Best Veteran of the European Dog Show which is a fantastic recognition. In October we participated on the club show of the Hungarian Leonberger Club, where the veteran class consisted of five veteran female, and judge Francesca Mavilla (I) awarded Dotti with the title of Veteran Club Winner. Dotti gained even a new championship last year: after her Austrian Veteran Champion title she fulfilled the conditions of the Hungarian Veteran Champion title. If I could ask anything for 2020, I wish that Dotti would remain energic, happy and healthy!

Mythos participated only on three dog shows last year but he achieved wonderful results. We are the most proud of him because he was chosen among the TOP 4 males in champion class on the 1st of May in Leonberger, and to top it all on the second place, he got Res. CAC title from judge Thomas Walker (A). It was the first time that we travelled to Leonberger, and we are very proud that both our dogs were chosed among the TOP 4 in their classes, and to top it all both mother and his son on the second place! Mythos had another great result in 2019: he fulfilled the requirements of Interchampion title in spring, and before Christmas we received his Interchampion certificate from Belgium, so officially he is the first Lions from Fairy Tale leonberger who has the C.I.B. prefix before his name. We are very proud of him!

And here is a photo of our team in Leonberg, mother and his son are smiling with the cups for their second placements:

Alice participated only at one dog show last year, but she won Best of Breed title, and fulfilled the conditions of the Serbian Champion title and with this result she got her first championship!

Even the youngest member of our kennel, Fanta, closed 2019 successfully: she participated on five dog shows in minor puppy class and she won first place in all five times, moreover, one if her wins happenned on the specialty club of the Hungarian Leonberger Club where are a lot of minor puppies and puppies every year. Thanks to her results Fanta got her first championship: she is Hungarian Minor Puppy Winner. :) Additionally, Fanta and Franko (Amor's owner, and Amor is Fanta's daddy) participated at Dog and child competition on the specialty show of the Hungarian Leonberger Club, and they won first place together!

Our puppies have arrived!

The puppies of Picúr and Dakota were born on 22nd of February. All four males and even Picúr are doing great. You can find more information HERE.

The Hungarian Leonberger Club held its yearly club dinner and Top Leonberger and Top Breeder of The Year competition awards on the 16th of February. We are very happy and proud of all our results:

Lions from Fairy Tale kennel: Breeder of The Year 3rd place! We would like to say thank you to all our puppy owners who participated in dog shows this year and helped us to reach this amazing result!

And last but not least big congratulations to two young leo owners who were awarded in the "My Dog and me" competition: Komendánt Fanni & Vépi Antónia!

Dotti is Veteran Champion of Austria!

Dotti won her third CAC title in veteran class in Austria, and we received her champion certificate, so she is now officially Veteran Champion of Austria :)

In 2018 son of our Alex, Mufasa (Pan King Pes Kosice Mufasa Z Leonkovho Raja) finished in the TOP 10 in the United States based on his show results, in a very strong competition. With this he surpassed his fantastic 2017 performance, when he finished in the TOP 20. In addition in 2018 he qualified for Crufts, we can't wait to meet him in Birmingham in 2020!

Big congratulations to the whole team:

Our puppies have arrived!

The puppies of Balisha and Amor were born on 28th of November. All seven puppies (4 males and 3 females) and even Balisha are doing great. You can find more information HERE.

The Austrian Leonberger Club organized its yearly club show on the 26th of May. The club celebrated its 40 years anniversary and they had a record number of participants: 130 leonbergers! The event - like always - had a friendly atmosphere this year too.

We travelled with Dotti and Aslan in Anthering. Aslan participated in hobby class where the participants get written report. Judge Alain Pécoult (FR) had a nice opinion about our boy.

And it was the first time for Dotti in veteran class. She enjoyed the work in the ring very much, she can not deny how much she loves dog shows. Uschi Eisner (A) judged the veteran females, and Dotti won first place in her class and got Veteran Club Winner title! Four years ago, Dotti's daughter, Alice won junior class and got Junior Club Winner title, so this great result evoked nice memories.

But it was not the end of the day! Judge Alain Pécoult (FR) decided about the Best Veteran title, and among the female and male Veteran Club Winner he chose Dotti to Best Veteran! In addition to this honorific title we got the special award of the International Leonberger Union.

We are very glad that we got these great acknowledgements, but which is even more important that Dotti is carefree, happy and healthy even over 8 years old, and the only thing I wish to ourselves is to be like this for a long time!

On the 28th of May Alice gave birth to a healthy boy. You can read more about Enzo HERE.

The Hungarian Leonberger Club (LEOE) organized its yearly Specialty Show on the 22nd of April where there were 54 leonbergers which is a record in the history of the Hungarian specialty shows. Our kennel was represented by 10 puppies - I am very grateful to their owners for coming! In addition we entered Dotti, who is the founder of our breeding, and one of Alex' son, Bruno also partecipated on the show, so we had many participants to keep our fingers crossed. :)

The part of our team (Aslan Junior and Lara are missing from the photo):

Minor puppy classes were judged by Hargitai Gábor (H). Among the males we had three participants: Aslan (Darwin), Bruno (Dallas) and Darko (Darth Vader), all three of them were great and got the best result: very promising classification!

The girls in minor puppy class - just like their brothers - all got very promising classification! :)

Junior, intermediate, champion and veteran classes were judged by Jorgen Hansen who arrived from Denmark and has been breeding leonbergers for more than 30 years.

Aslan was entered into hobby class. He got a great written report this year too and - as always - it was a pleasure to show him. :-)

After a two years long break we entered Dotti into champion class for the last time as a few weeks later she will compete in veteran class. It was a perfect goodbye from the adult classes and nice end of the successful show years: Dotti was working perfectly, like a young dog in the ring, and even running (!) among her competitors who were 2, 4 and 6 years younger than her. She got excellent classification and won third place! I am extremely proud of her! Of course the most important for us is that she is completely healthy, happy and well-balanced, she really enjoyed the day with her children and grandchildren. To be continued in veteran class soon! :)

We had a great time at the Hungarian Leonberger Club's club dinner and Dog of the Year competition awards on 10th of February. Our results are:

Lions from Fairy Tale kennel: Breeder of The Year III. place! We won III. place four times in a row: as a dedicated, young and small breeding we are very happy and proud for this great achievement. We would like to say thank you to all members of our dog family, we could not reach these results without you!

Our dogs were awarded in Dog of The Year competition too: 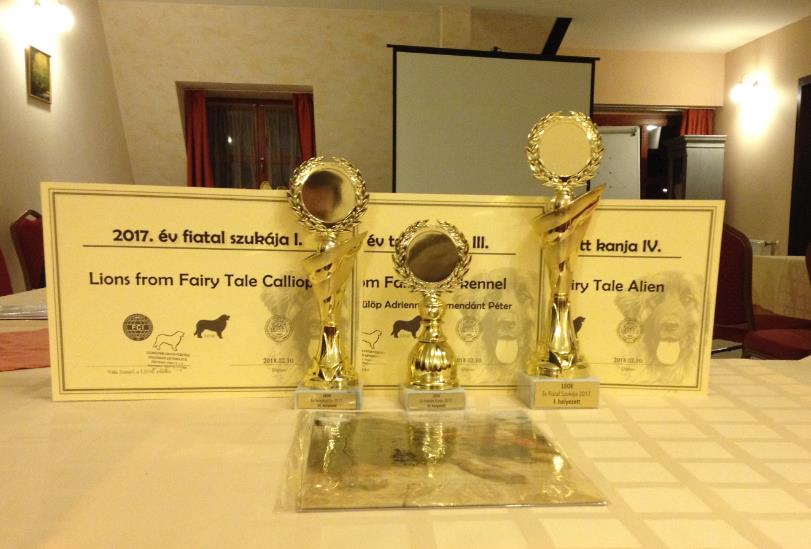 Welcome to the website of Lions from Fairy Tale leonberger kennel!

Everything began in May of 2010 when our first leonberger, Dotti was born... After nice show results and successful breeding test we got our kennel name "Lions from Fairy Tale" in the summer of 2012. We have seven leonbergers now: our Alex came to us from Finland in April 2012, and our three "babies" were born last Christmas. My parents' youngest girl, Balisha was born in June of 2014. Since summer of 2016 we have a puppy again: Calliope aka Picur makes our days fantastic. :)

On the left side you can read more information about our dogs, their results and leonberger breed.

Have a nice staying here!